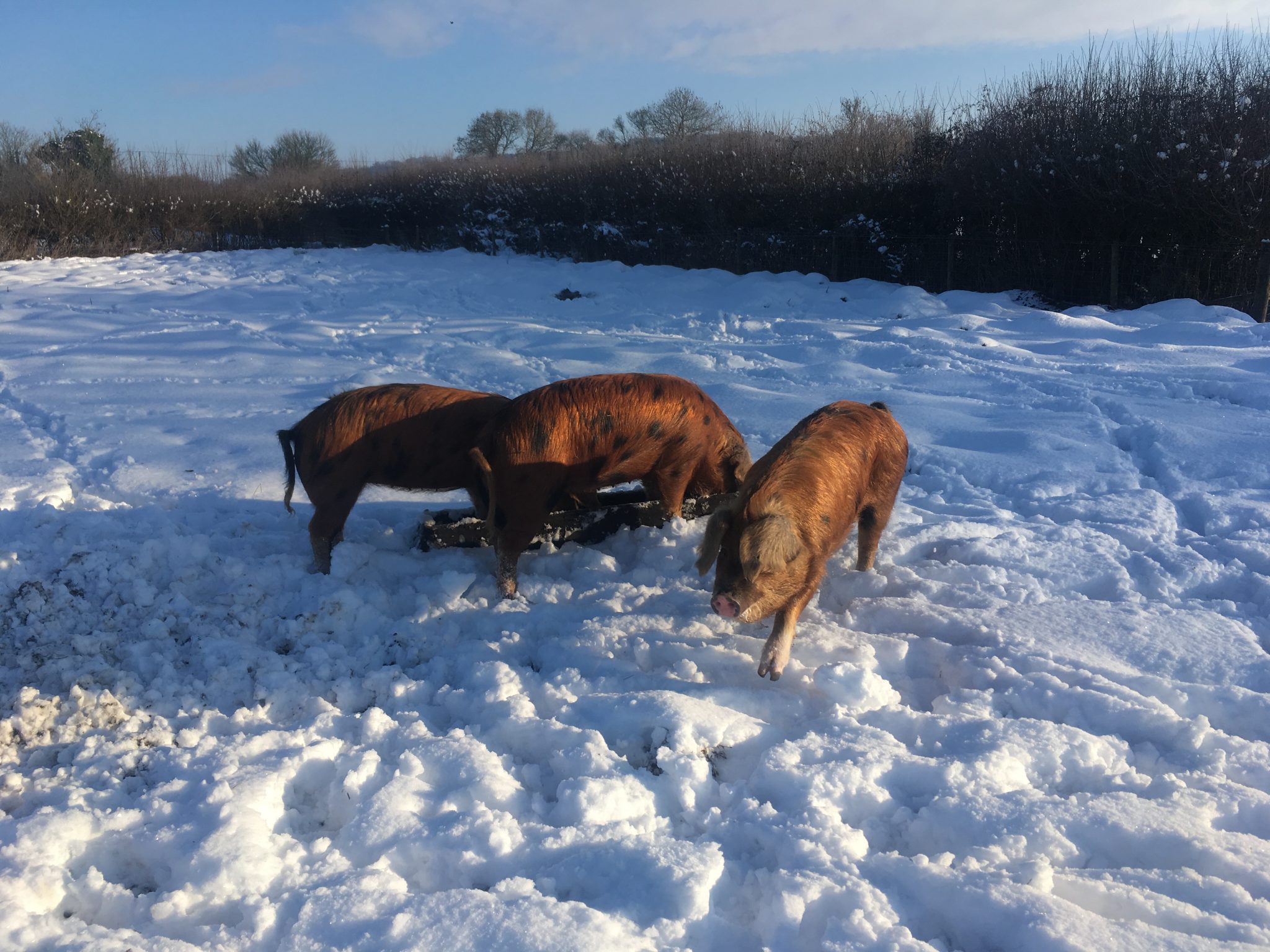 With the festive season behind us, it is time to reflect on the year just gone with all its twists and turns.  With some relief, it was not a year of weather extremes – no massive heatwave, no Beast from the East to test us – plenty of variety to talk about but we were happy with a ‘moderate’ year!

The early months were, as always, quite quiet – a case of managing the animals well through the winter months, making sure they are all well, warm and happy while planning and preparing for the warmer weather to come.

February saw frosts and sprinklings of snow but also surprised us with some warm days – the Guinea Fowl even presented us with an egg mid month when we would not normally expect to find one until early April.

We were delighted to be winners in the South West Tourism Awards, celebrated at the fabulous air museum at Filton near Bristol.  We were awarded Silver in the Self-Catering category and given the enormous variety of tourism providers in the South West, that was a wonderful surprise!

The warmth brought the blossoms out early on the hedgerows and fruit trees and a late frost in May did catch a few out but overall, it was a good season for fruit – the frost damage seemed to be light enough that they mostly recovered.

The handsome Large Black boar, Dai, came to the farm in March to ‘connect’ with Frosty our Large Black sow.  He’s a big chap but very laid back and with fingers crossed, we marked up the calendar for some August new arrivals.

Reggie, an Oxford Sandy & Black boar also came to stay for a few weeks and had three ladies vying for his attention.  Quite a busy few weeks for him, but he’s young and fit and went about his challenge with enthusiasm …. and clearly with skill as all three ladies went on to produce large healthy litters in August.

Early summer weather was both warm and wet – a perfect combination for growth and the fields and hedgerows were bursting forth with new growth.  The damage from winter’s wet months was soon repaired – fresh green growth covering what were very muddy fields.  Nature is a wonderful thing!

June saw a flurry of events – we welcome visitors to the farm and host group events on the BBQ terrace.  Our Slow Food group came on one of the rare damp days in June but everyone had fun, meeting the animals, taking many many photos and finishing with a substantial feast.

We were also host to a group of CPRE members for a farm tour and a charcuterie tasting.  People are always delighted and amazed by what they find here at Buttle Farm.

The first Guinea Fowl eggs of the year went into the incubator – fingers firmly crossed for a good hatch rate to replace some of our winter losses to Mr Fox 🙁  That’s the downside of having a fully free-range flock.  And we had a bumper year on the farm with our feathered friends.  A wild duck took up residence on our courtyard and made her nest just beneath the washing line.  She duly hatched out 6 cute ducklings and two days after their arrival, they marched off in search of a ditch to test our their swimming skills.  The swallows returned from their over-wintering in Africa and took up residence in the archways and barns, and proceeded to produce two new families over the months before they headed south.    And last but not least, the partridge who has attached herself to our Guinea Fowl flock, returned to the barn with a trail of chicks behind her – introducing them to the food-on-tap service on offer.

We also provided accommodation this year to a pair of barn owls who produced 4 young which they successfully raised during the summer months.  We installed a trail camera in the barn so were able to watch their progress without disturbing them.

In July, we hosted a great pre-wedding party for Ella and Jeremy on the terrace – 50 people from around the world all enjoying the wonderful weather and meeting new people.

The glorious weather continued, the hay was cut and August brought us a flurry of piglets.  For all our best plans to have a litter of piglets each month through the summer, we ended up having 3 litters over just 8 days.  And all the sows did a sterling job – we ended up with 30 additions to the farm!  One of the litters included a runt who was quite small, but topped up with a few supplementary feeds, held her own and is now thriving.

In July, we bought a boar – our first.  A handsome Berkshire boy who had been on the show circuit during the summer months.  He didn’t have a ‘pet’ name so, given all that was going on in Westminster at the time, we duly named him Boris – unproven, could be a superstar, could be a stud, only time will tell.  He spent the first few weeks on his own to settle in, and then moved in with Eyelashes, a senior, retired Berkshire sow and, let’s just say, she set him straight on how to behave!

He moved on to his 2 new wives in November – this was to be his first test.  As a youngster, he is currently considered unproven – when his first litter is born, we will know he is fit for purpose!!  We sit here with fingers crossed now as we believe both are in-pig – we’ll know in March!

The wonderful summer weather continued into September – the fruit and vegetables continued to ripen and the piglets grew well.  Despite two of the sows being first-timers, they did a wonderful job.   In October, they were weaned and some of them have gone on to new homes.  We had our last guinea fowl hatch of the year and watched as the swallows gather before they headed south.

In November, Dai returned to the farm, this time to serve both Frosty and her daughter from 2 years ago, Snowy.  Despite the shocking weather and double duties, it would appear that he has done his job and headed back to Wales just before Christmas.

Christmas was a crazy busy time – not so much with the animals but with the other sides of our business.  Our Christmas orders flooded in, bacon, sausages, ham and salami all sold out and customers went away smiling with their haul.  And the holiday cottage was fully booked too – three different groups of people came and held their celebrations here with us.  Their reviews were delightfully positive – it is lovely to be part of happy holiday memories!

For those who know me, of course the final paragraph has to be about the weather!  December was WET – very WET.  The forecast was for it to continue into January which I am hope is wrong but …..  The pigs don’t seem to mind, but the humans find it quite hard work!

NB:  details of all these stories will be found in the monthly farm round up along with photos and videos