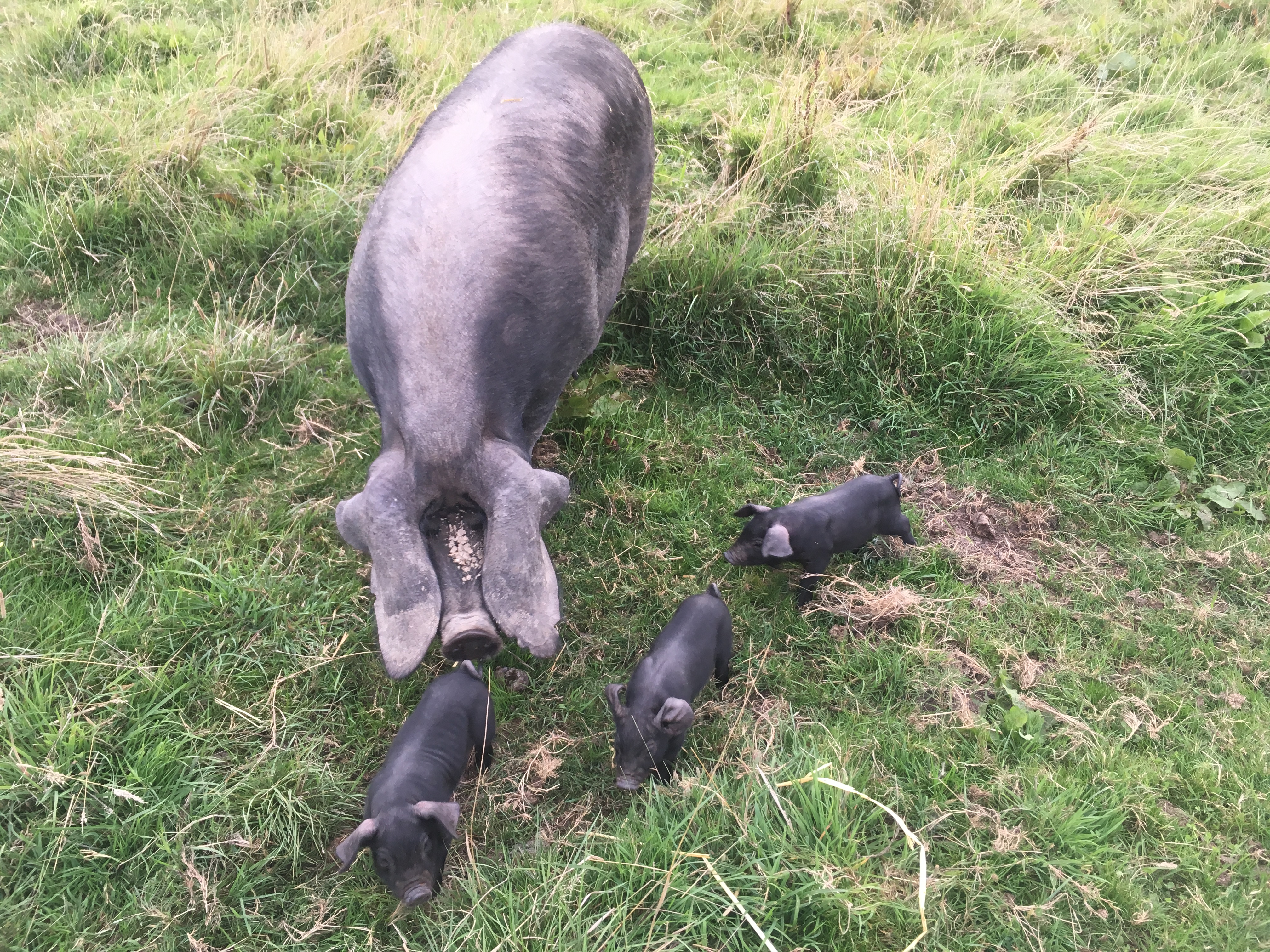 What a great summer – yes, some extremes, but one to remember, mostly for the sunshine!  The heat and sun have meant early crops for many, including some fabulous blackberries coming in our hedgerows and windfall apples arriving by the bucketload from friends and neighbours.  The pigs LOVE them!  The grass is finally growing again thanks to the few rainy days we’ve had so there is a chance of a second cut on our hay fields, fingers crossed.  And we’ve even managed to grow some tomatoes this year – not famous for my green fingers, but given a heatwave year, even I can get it right!   Now, if we could just have a nice long, warm autumn too …. 🙂

Busy times on the farm – early in the month we had a new arrival – Quincy – all 200kg of him.  Quincy is a Large Black boar that we have borrowed to come ‘calling’ on two of our Large Black sows.  Let’s just say, he appears to be an enthusiastic worker and fingers crossed, his efforts will result in some Christmas new arrivals.

Quincy was followed onto the farm by six 8-week old Tamworths who were a bit skittish when they arrived but have soon mellowed with the use of some apples and a bit of time.  They are in a ‘training’ paddock at the moment while they get used to electric fences – a few squeals in the early days but they soon get the hang of it so they will soon be off to one of the big fields.

And last but not least, Frosty produced her piglets – 10 lovely healthy bundles – who are growing like crazy and proving to be a huge time drain – they are so engaging.  They arrived overnight – she showed no signs when I checked on her in the evening but by morning, they were all out – well done that girl!!  She’s now eating for England – her milk is in GREAT demand!

Some of our resident swallows had some late extra additions to the family mid-month – the nest is right outside our bedroom window, under the archway and so every morning we were waking to a dawn chorus of our own as the youngsters demanded their breakfast.  Flying lessons are always fun to watch – the flying part seems easy but judging the landing is something that takes them a bit of time to learn.   We even had a couple end up coming in through open windows and taking up residence in the bedroom … they left quite quickly but did leave some little presents on the floor.

The Chalk Barn, our holiday cottage, has been busy this month and we’ve had some more lovely reviews from our guests.  We’re full for the first half of September but have some weekend availability later in the month and in October for anyone interested in an autumn break.

The month ended with the Bank Holiday weekend and on the Monday, we hosted a Charity Fund Raiser/BBQ for friends around the area.  It was not the BEST weather we’ve had, but we didn’t get wet so can’t complain too much.  Money was generously donated by our guests to support two worthy charities – the Benson Hall and the Wiltshire Community Foundation High Sheriff’s fund.

And to end with a bit of a rant – my favourite hobby horse again – labelling.  It drives me crazy how hard it is for consumers to work out what they are buying – all the fake farms and ‘flowery’ language on packaging all making factory farmed produce sound better than it really is.  If you have a few minutes, have a look at this – it’s not just me who gets mad!  🙂