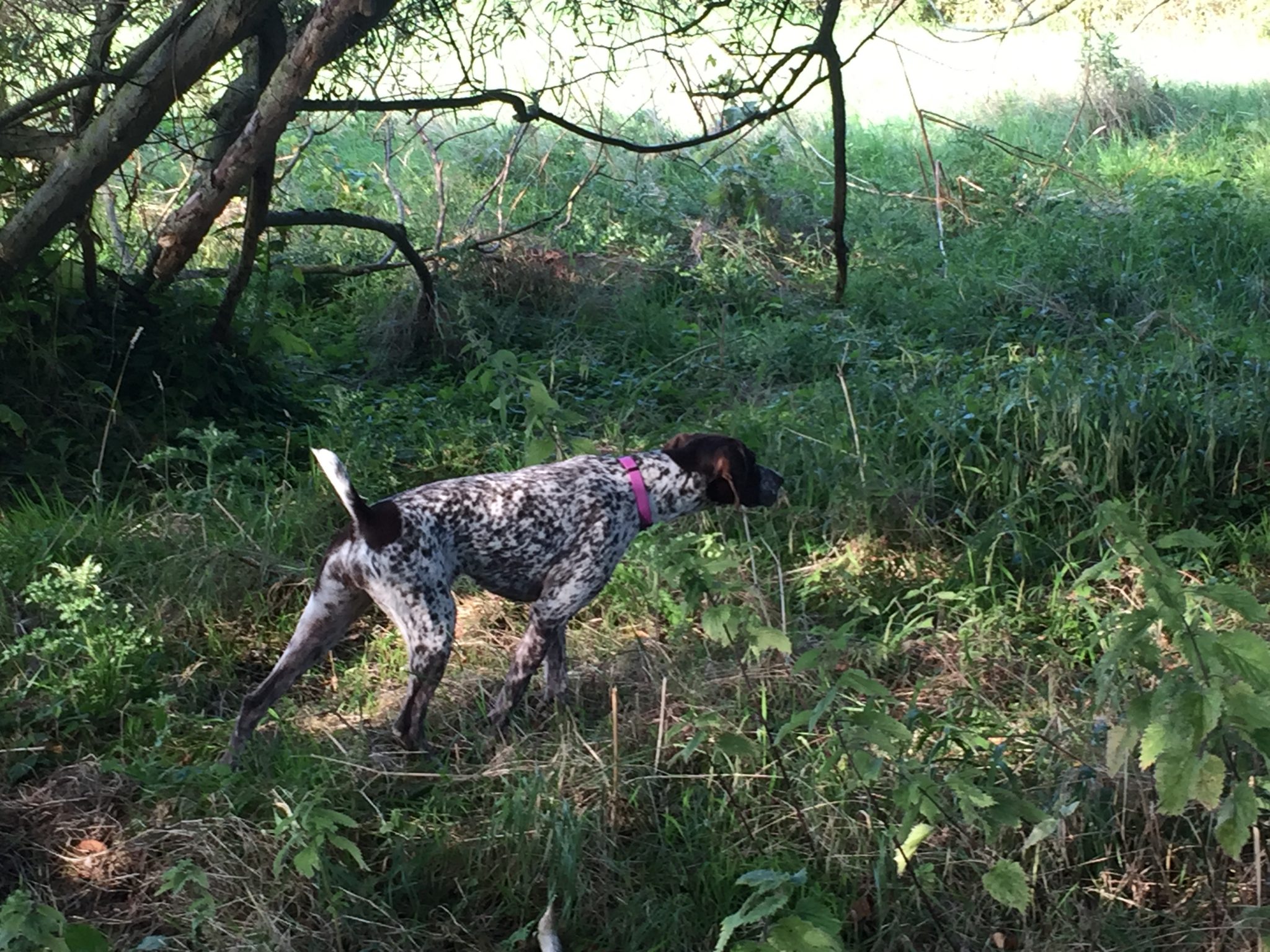 Summer is racing through at a ridiculous speed – and just for a change, no complaints from this farmer about the weather. It’s been a good mix of sunshine and rain – everything is growing well, the fields are in great condition, the pigs are happy – life is good!  Our cover photo this month is our German Shorthaired Pointer, Pheby.

This month has been all about piglets. Whatever the planning spreadsheet says, the reality is that we can’t always manage Mother Nature the way we would choose. Instead of a litter of piglets per month, this month we celebrated 3 litters in 8 days!
Getting ready for the big day involves moving mum to her own paddock, nearer the house so we can keep a good eye on her when time comes. Two of our expectant mums are first-timers so spending a lot of extra time with them so that they are 100% used to having us fussing around just in case we need to get involved on the day. You always hope for the best, but plan for the worst.

Installed in their new individual quarters with a couple of weeks to go, every day we check for signs …. In all three cases, we are pretty sure we know when the deed was done so have a good idea of their due dates.  A pig is pregnant for three months, three weeks and three days – easy to remember and surprisingly accurate.

A few hours before they go into labour, there is a noticeable change in behaviour – they start nesting.  Each pig is different – some just shuffle their straw around a little to make a nest, others go BIG bringing in mouthfuls of grass, weeds, sticks, anything they can find and build a mountain!  For the big builders, we spend just as much effort clearing the weeds away while they are off eating – you really don’t want piglets being born onto a huge pile of stinging nettles or thistles.  Apart from potentially being rather uncomfortable, there is always a risk that a piglet gets buried in the pile and inadvertently laid on by mum.

First up was Frosty, our lovely Large Black sow.  This is her second litter with us and she was LARGE!  She duly delivered overnight and the following morning we were presented with 7 large healthy piglets – not a huge litter but healthy is the most important thing.  As with previous litters, she is tending them well and they are thriving.

Next up was Gertie, an Oxford Sandy & Black – her first litter.  She turned out to be a super-nester – her ark was loaded with greenery but by distracting her with dinner, we were able to clear most of it out and just left a few bits and pieces in to try and dissuade her from doing more.  The biggest surprise was that she produced 13 piglets without any help from us.   She was not particularly big so that was a remarkable score for a first timer!

Four days later, Gertie’s sister, Goldie, followed in her footsteps and build a monster-nest before producing 11!  A prolific family it would seem!  Sadly, Goldie lost one on Day 2 but the remaining 10 are growing well.

Boris the boar has been in action – another first timer who is approaching his new job with enthusiasm if not much skill.  He no longer looks like the show pig he was when he arrived – he loves a good wallow – but in my opinion, he looks like a real pig now!

The Guinea Fowl have been busy too – if you read last month’s blog you will know that we had a long power cut half way through incubating a second batch of eggs.  Despite wrapping the incubator in towels and getting an emergency generator going, it would seem it was not enough as we only had 5 eggs hatch.  But 5 was better than a complete wash-out and they are now in the brooder in the barn and seem to be none the worse for their challenging start in life!    The first hatch are now fully free range and the group includes a white – haven’t had one of those for a few years – sadly, being white in nature is not always a good thing so we keep our fingers crossed for him.  We have one more batch of eggs being incubated now so hoping for no power interruptions this time!

The cottage has been busy – our visitors range from people in the area for a family wedding, through to walkers enjoying the Ridgeway or the White Horse Trail, to people just wanting to escape busy towns for a relaxing stay in the countryside all giving us great reviews.  Having 4 equally lovely ensuite superking  bedrooms means that groups of friends don’t have to draw lots for who gets the master bedroom or the box room!!  Check availability and photos HERE.

We’ve not seen anything of the owls recently – we suspect that mum and dad have kicked the kids out to fend for themselves.  However, the swallows that took up residence on the farm have hatched their second brood of the year who are now filling the skies with their flying practice, getting some training in before their long flight south as Autumn arrives.

Also this month, we welcomed three vet students on to the farm.  During their studies, all vet students have to do placements on farms covering dairy, sheep and pigs.  Due to the reluctance of many intensive pig farms to allow any strangers on to their premises, students struggle to find placements with pigs.  They each spend 2 weeks with us, doing whatever needs doing – and we usually save up a few jobs for them to.  We hopefully send them away enthusiastic about pigs, about high welfare, about rare breeds and who knows, they might end up being the only pig expert in whichever practice they join.  It is quite an investment in time for us, but the more people we can ‘convert’ to pig enthusiasts the better!

And last but not least, we welcomed another film crew on to the farm this month.  Not BBC or documentary makers this time, but a crew from DEFRA.  They captured LOTS of material – they are putting together three separate information films focussed around pigs.  One is looking at a day in the life of a farmer – and that one has already gone live as part of Farm24.  Another is looking at rare breeds and each of our 6 breeds got their moment of glory and the final, more serious, one is going to be a feature on African Swine Fever – a nasty disease that is present on the European continent and concern is growing about it crossing the channel and reaching the UK.  Sorry to end the blog on a serious note, but ASF spreads here, the effect could be devastating so please pay heed to all the advice – a big risk is bringing meat products back from Europe,  ideally don’t do it and always dispose of any waste carefully.  Disaster could be caused by someone buying a ham sandwich in Europe then at some point, throwing  the remains away carelessly – perhaps throwing it out of a car window onto a verge where it could be eaten by an animal …..  You will see lots of notices about it at ports and airports, but please, be mindful when you travel!