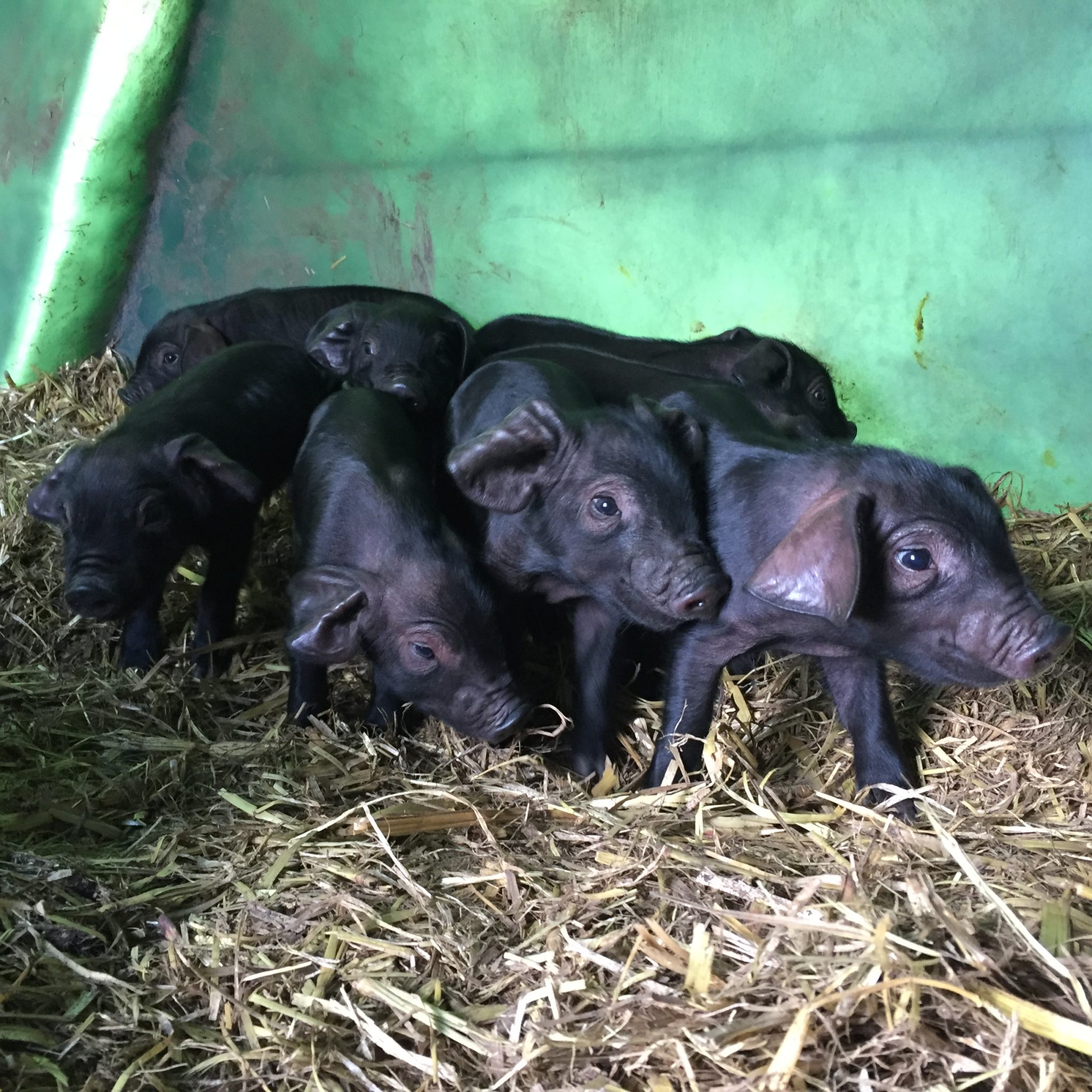 We find ourselves living in interesting times, that’s for sure – and I am not just talking about the Corona virus/lockdown that started late on in March.

March started with us up to our knees in mud after perhaps the wettest winter on record – certainly the wettest either of us have known here at the farm – not only wet but relentless with no real cold snaps to give us a break!  But, then, as British weather does, it changed and by the end of the month, the sun came out and we had moved into almost drought and the mud was not only drying but also cracking badly – weird!!

The other big news for March was PIGLETS!  We had 3 litters in the space of a week – first up was our first-time mum Berkshire WhiteTail – and also Boris the Boar’s first offspring.  Well between them, they did a great job and we have 8 bouncing babies going from strength to strength.  Piglets are born fully functional – by that, I mean that their eyes are open and they are up and walking in minutes.  Here’s a little video clip of them when they were just a few hours old, and another of them a few days later, venturing outside the ark tempted by the sunshine.  They double their weight in the first week, and same again in the second week and are now really chunky – final video of them at 2 weeks old, playing in the straw in their ark.

Next up, we had two litters on the same day – our Large Blacks, Frosty and her daughter, first-time mum, Snowy.  Frosty produced 8 – 4 boys and 4 girls mid-afternoon and Snowy produced 4, 2 of each in the early evening.  First litters are often smaller although WhiteTail proved us wrong on that front!  The Large Blacks have famously large ears – they are sometimes called the Elephant Pigs – but those ears are folded back when they are born – more streamlined I suppose.  Over the first few days, the ears flop forward to their ‘normal’ position, some faster than others and a couple looked rather lopsided for a few days as one ear came forward and the other stayed back!!  A couple of videos – as newborns, and then a few days later where they all worked out how to get out of their ark – and importantly, to get back in!!

Now, I have to say, the guinea fowl have not been so cooperative.  As the month went along, they went through their Spring rituals – boys fighting boys, girls standing back and watching – as the mating began.  And the laying has definitely begun but can we find the nest?  No – not so far.  Very frustrating!  Occasionally we find a broken egg on the path indicating that a crow or rook has found the nest and robbed it – grrr!  The birds lay wherever they fancy, usually in a hedgrow or a patch of nettles and early in the year, the cover is just not dense enough to keep the thieves at bay – the faster everything grows the better chance they have of keeping the eggs safe … from the thieves, not from us.  As soon as we find enough eggs, they will go into the incubator so we can replenish stocks – sadly, again, we lost quite a few birds to Mr Fox through the winter 🙁

As you can tell, farm life has continued to keep us busy – we are officially essential workers – part of the food production community!!  In fact, apart from a few very unusual trips to the supermarket, not a lot has changed!    Unsurprisingly, the holiday cottage has been empty in the chaos that is lockdown – bookings for the spring and summer have cancelled so all quiet.  Looking on the bright side, when this is all over and everyone wants to escape for a break in the UK (I think international travel will be last on the list to free up), then we have plenty of availability!!  If you want to fantasies about getting away, check out the photos and some of our 5* reviews here!

Everyone else on the farm is doing well – Boris the boar has proved himself in the fertility stakes, I got a bit arty with a lovely pic of our golden Tamworths on a lovely sunset evening.  The pheasant population seems to have grown significantly and the boys, like the Guineas have been having their Spring punch-ups but they are always present when I go out to feed – seems they like pig food!!

Another challenge thrown at us because of the lockdown is the closure of all restaurants – given that most of our meat produced goes to restaurants, that is potentially a real issue for us.  We have livestock in the fields ready to go and a not insignificant feed bill!  Happily, so far, we have seen extra orders from our private customers to fill the gap – a BIG thank you to them from us and long may that trend continue – supporting your local small producer will be much appreciated so do give some thought … if you have a bit more time on your hands, do some research – what could you buy from a local producer?

So, ending on a positive note this month rather than a rant.  What positives do we think will come out of this lockdown period?  Will people continue to value our health service as they do now?  Will they be more thoughtful and care for others less fortunate than themselves?  Will people give more thought to where their food comes from?  Will they look to spend holiday time in the UK rather than suffer the vagaries of international travel?  Will we as a nation use our cars less and create less pollution?  An interesting time of reflection and perhaps to break some ‘bad’ habits.

Good food for thought …. and talking of food, here’s something really nice to finish on!!  PIE!