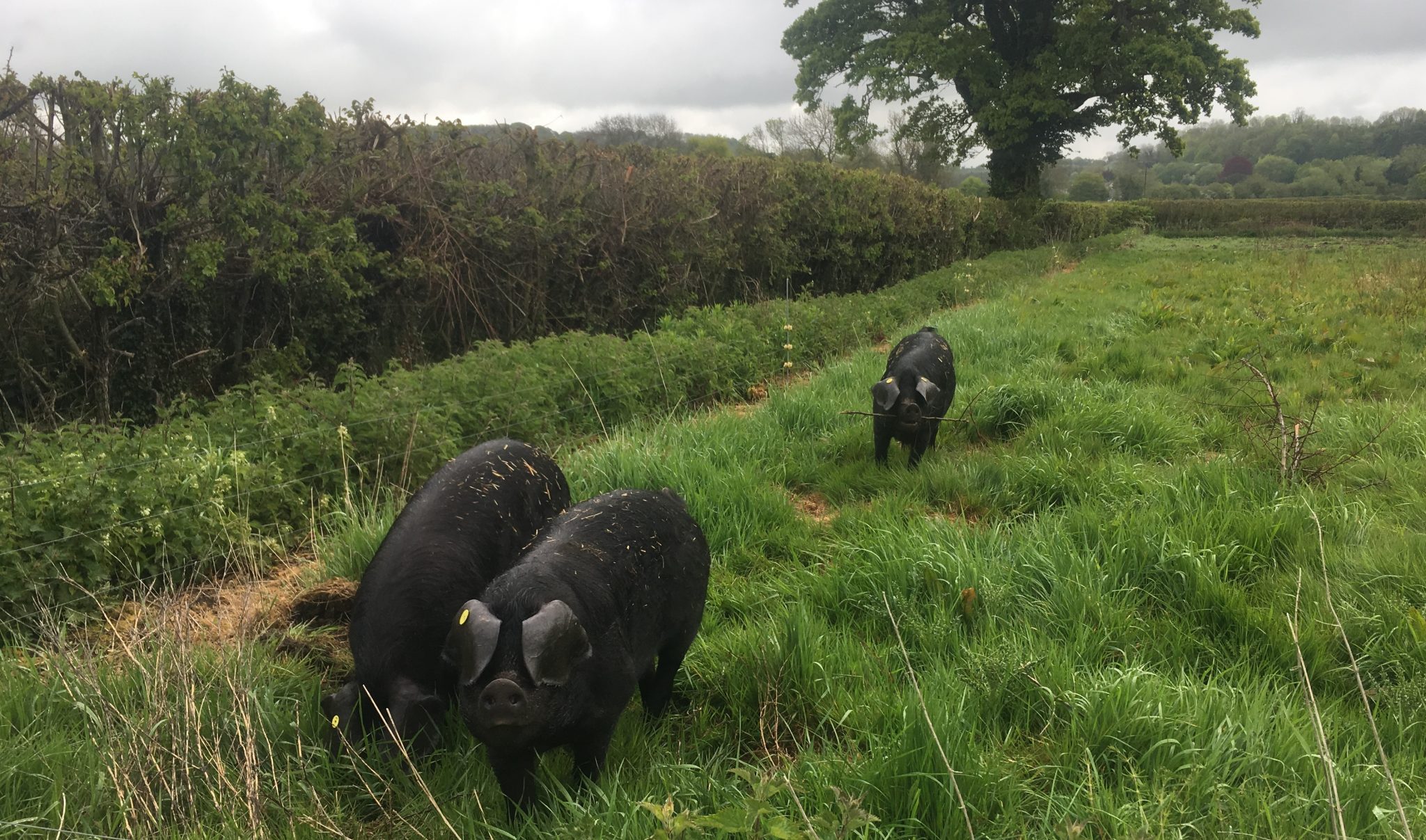 May blew in as April finished – I think ‘variable’ is the right description for our weather. Scorching hot days were followed by torrential rain. Luckily, us Brits like a little variety in our weather 🙂
The plus side of the mixed up weather is that everything is growing really well out there – the fields and hedgerows are looking in fine form and the gardens around the house and yard are coming into their best summer colours.  The fruit trees seem to have survived the late frost and there is a good crop of apples and pears developing.   In my mind, there is no doubt that mid-May to mid-June is quite the BEST time to see England at its best.
Also growing well are nettles – weirdly some pigs don’t touch them at all whilst others cannot get enough. Here is a quick video of our demon nettle destroyer – Eyelashes – she can’t get enough of them!

We’ve continued to move pigs around the farm, allowing some paddocks to rest and recover and letting the pigs loose in some fresh new pasture.  For many, that is a short trip in the trailer, for others, just the removal of an electric fence.  Even when the fence is gone, some pigs take some considerable convincing to move into the new territory – they remember where the fence used to be and are really not sure about crossing the line.  It usually takes a little time, some food and they get there in the end.  The favourite of everyone is the soft Sow Thistle with its yellow flowers – they are the first thing to be attacked and the sound of crunching is a real give-away that another batch has been found.
Our guinea fowl continue to torture us by moving their nests on an almost daily basis and sadly, the crows and magpies are much better at finding them than we are. However, we have managed to get the incubator filled up – some eggs from a friend and topped up with a few of our own. Fingers crossed for a good hatch in June. Watch out for photos on FaceBook!
We also gained three adult guineas this month – their owner could no longer keep them so we were happy to help out. Two males and a female are now settling in – for the first few weeks, we keep them in a coop in the barn. They can see and interact with the ‘locals’ but stay locked away. The theory is that a few weeks in a new home is enough to have them ‘bond’ to the barn and consider it to be their new home – we shall see when we let them out next month. Fingers crossed they don’t just disappear into the distance. We’ve only taken in adults once before so we don’t have great experience of this!
Dai, the Large Black boar has gone on to pastures (and girlfriends) new – we’re pretty confident that he did what he came to do and our lovely Frosty is going to deliver us some piglets in mid-August – fingers crossed. She raised 10 chunky little rascals last year – wonder how many she’ll produce this year?
Also busy during May was Reggie the Oxford Sandy & Black boar. Reggie had a bigger challenge on his hands – three lovely ladies were awaiting him on his arrival here at the farm. But he’s young and fit and has been diligently paying attention to his duties. Again, fingers crossed, all 3 are now loaded up with piglets and due in late August – that’s going to be a busy month!  Anyone planning to come piglet visiting, then the first couple of weeks in September will be perfect.

June’s going to be a busy month – we’ve got our annual Slow Pig day, in association with Slow Food, shortly followed by a group visit from the folks at the Campaign for the Protection of Rural England, all followed up with a speaker slot at the WI!  More news on that next time 🙂