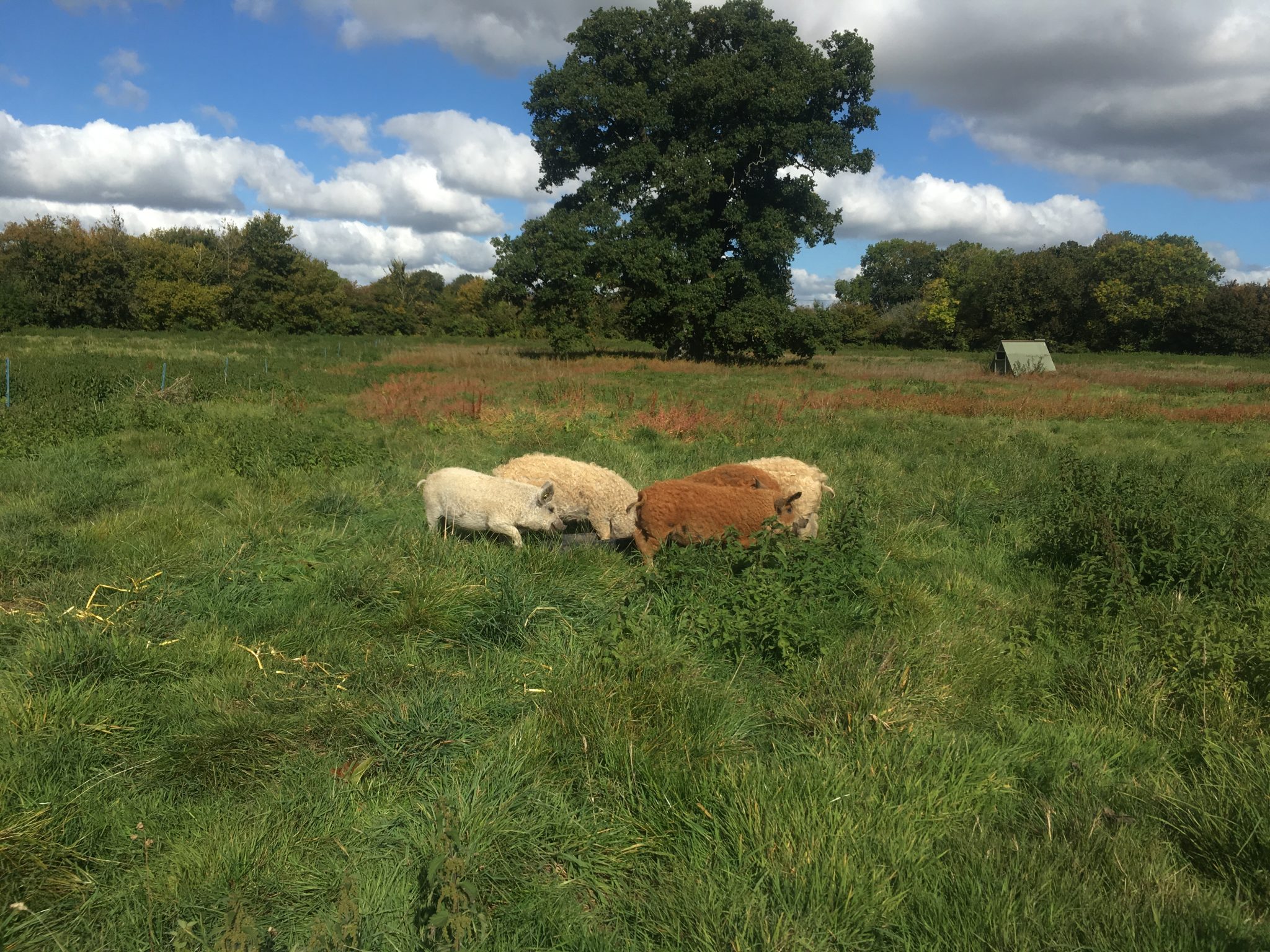 The days may be getting shorter and British Summer Time ended last week but so far so good – the Autumn weather has been behaving itself very well. After our year of weather extremes so far – the wettest winter, the Beast from the East plus the Heatwave Summer – I’m happy to report that October was kind to us. Drier than usual, a lot of our ditches are still completely dry, we’ve had sunshine aplenty, warm days, blue skies …. and a few heavy frosts and a bit of rain …. but this will do nicely.
Those paddocks that are being rested are looking good – some fresh grass has been growing to fill in the gaps despite the chilly nights. I’m sure it won’t be long before I am moaning about rain and mud but for now, happy farmer!
The pre-winter moves to new paddocks continue – all the pigs seem very happy with their new paddocks knee high in grass and nettles and are setting about flattening the lot! No escapees to report.
Our apple suppliers (our neighbours) have been doing a fantastic job for us this year – LOTS of bags of windfalls being filled and delivered to the gate – in many instances, we don’t even know who has brought them, so, if you are reading this, many thanks! The lovely autumn meant a bumper crop of blackberries in the hedgerows plus our own little veg patch had a record year – loads of tomatoes, peppers that actually ripened outside, chillis galore. And even late in the month, the rocket and land cress was still cropping well.
At the end of the month, our Large Black piglets celebrated their 8-week birthday which means weaning, tagging and worming. Frosty the sow has been moved off to a fresh paddock to recover – she showed no hesitation when we dropped the ramp of the trailer and was up it almost before we were ready! As much as you can tell, they don’t miss mum one little bit. They’ve been eating the hard feed for several weeks now and as long as the lady with the bucket and the apples arrives, they appear to be very content! Because they have been so well handled (lots of visitors) since their birth, the tagging and worming process went without a hitch – most of them barely even noticed – we tag and worm during their feeding time so they have other things to concentrate on.
Mid-month we went to a Pork Fest at the Longs Arms in South Wraxhall, featuring Buttle Farm pork produce on every course (lard to make the pastry of the dessert, in case you were wondering!). Rob and his team did a super job and there were clean plates all round. Lovely pub, excellent food, well worth a visit.
From time to time, we get approached by film production companies as well as photographers to use the farm for a shoot. This month, it was a photo shoot for a stunning, restored Landrover Defender – a local company, Arkonik, takes old, tired vehicles and gives them complete make-overs – better than new with every gizmo, gorgeous interiors, the full works. We kept a close eye on them but regrettably, they took the machine home at the end of the day. There’s an 18 months waiting list for these vehicles so if you like the look of one, better get your order in ASAP!
And I’m going to finish up with a story and a bit of a rant. If you read these blogs regularly, you will know that one of my pet hates is misleading labelling – in particular, labelling designed to make the consumer think well of a poor quality product. So, this story published in the Times goes one step further. A pub menu offered ‘Tudor’ rare breed beef … but they made the mistake of serving it to the daughter of the man who founded the Rare Breed Survival Trust! She asked about the breed and was (patronisingly) told that it was VERY rare and she probably would not have heard of it. She pushed the matter further and eventually, the chef confessed it was a made up name purely to make his menu sound better. Fake marketing, fake labelling – ARGH!!!