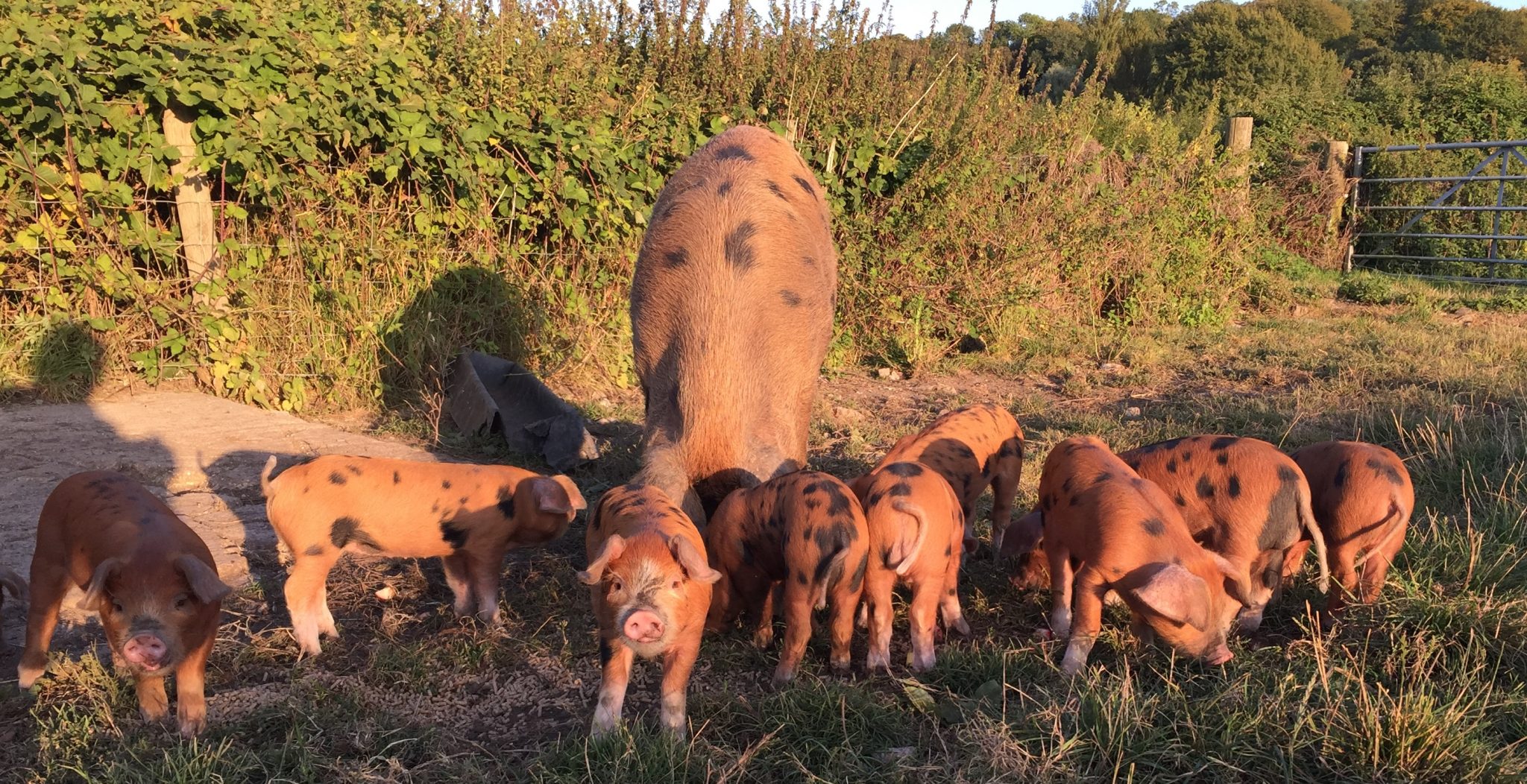 When the British weather is great, it is truly amazing. What a fabulous September we’ve been blessed with this year. My tomatoes have ripened well and we’ve hosted a number of BBQ parties out on the terrace – sunglasses were more in evidence than coats! Inevitably some rain came towards the end of the month and is forecast to keep going for the first half of October – ah well, can’t win them all!

As I type, we are still in the midst of British Food Fortnight, but why not try to buy British more often all year round.  We produce so much great food here in the UK, it seems a tragedy to eat imports.  Yes, I know we can’t grow bananas or lemons or many other exotics here, but for the everyday items – potatoes, onions … and meat …. why not focus on buying local?   For a scary ‘Imported Pork Fact’ read on to the bottom of this blog – you’ll be horrified – I certainly was!

PIGLET NEWS
For those who read this blog regularly, the August bumper harvest of piglets has kept us busy! Three litters over an 8 day period means the patter of tiny trotters has been deafening!  A piglet will double its weight in the first week and same again in the second week. When they are born, they are lean and leggy but the first few days it is as if someone is blowing them up with a bicycle pump as they put on weight.
Frosty’s 7 piglets (Large Blacks) have a slight advantage – an experienced mum and there are only 7 of them so they are very chunky and active. Next up was Gertie (Oxford Sandy & Black) who produced, and still has, 13 piglets – quite remarkable for a first-time mum and at 6 weeks in, she is  certainly always ready for her next feed to keep the milk production going. The piglets are lively and playful and now starting to eat her food which is good because it means they are not totally dependent on her for food so the pressure is easing on the milk bar. However, it does mean that they risk incurring the wrath of mum if they get between her and the food!
Goldie, another first-time Oxford Sandy & Black mum, is happily raising her 10 – seems very chilled and spends a lot of time in her wallow, snoozing whereas her piglets are boisterous to say the least!

For those who have been following the adventures of Boris the boar, he’s still in with Eyelashes for another month before he moves on to his next two wives – fingers crossed he is using the time well to learn his trade!!

GUINEA FOWL
The guinea fowl are managing to avoid the foxes – probably should not say that – and the youngsters are feathering up well – getting ready to go free range. They are still laying but that won’t go on much longer. Mid October is usually the end of the season for them as the nights get darker and colder. That means no more eggs until Spring – early to mid April as a general rule. Will miss them – they are SO tasty!

Autumn on the farm is time for sorting things out and getting ready for winter.  That involves fencing and arks in the main.  A lot of our arks were reaching the end of their lives – once a fully grown 200+kg pig decides to use an ark as a scratching post, unsurprisingly, the ark eventually succumbs!  A year ago, we bought three different designs to pig-test them and a favourite emerged.  Were going through the replacement process  to make sure all our pigs have cosy and watertight housing for winter.

The fencing changes are ‘defensive’.  Having been here now for over 10 years, we know how the land works, which areas are prone to flooding in the depths of winter, and start sectioning some of them off.   By keeping the pigs off the flood prone areas, they won’t get so damaged in the winter.  That means that they start growing as soon as spring arrives and we will have lovely lush, fresh grass to move the pigs on to next March/April.    So, if you see weird fence lines in the fields, don’t worry, I know they are not necessarily straight but they are doing an important job!  See here for a photo of Robert and Pheby taking a break from their chores 🙂

Many of you will know that one of my pet hates is misleading labelling:  made up farm names that are designed to disguise factory farms, much travelled meat produced in one country, processed in another before ending up on the shelves here in the UK etc.   Found a new one this month – chicken on sale in Tescos – labelled Eastman’s Deli, sounds good, however, the chicken was raised and processed in Thailand before being shipped half way round the world to be packed by Tescos and end up on our shelves.  Think about the food miles, the environmental cost of transportation not to mention the question of animal welfare – if only we produced chicken in the UK, huh?

And as for that scary ‘Imported Pork Fat’ – did you know  that an estimated 70% of pork imports (pork and pork products such as bacon and ham) would have been illegal to produce in the UK on the grounds of animal welfare.  (Source – AHDB)  I’ll just leave that there …..